The Dunster General Store and Post Office are located in downtown Dunster, across from the train station and next door to the Dunster Fine Arts School. Established in 1918, the store sells groceries, gas, feed, housewares, hardware, and just about anything else locals may need. Visitors to the community will also find t-shirts, postcards, and a selection of local goods (from fresh produce in season to books and CDs produced by residents to various craft items). And if you're just looking for something to eat or drink, we have very good coffee, sausage rolls and samosas baked fresh daily, and penny candy (well, most of it costs more than a penny, but not much) for those who can't help themselves. 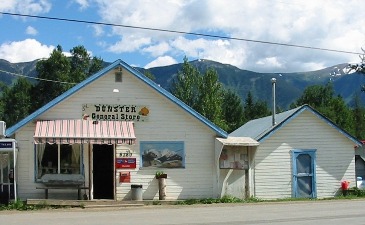 The store also places regular (every 6 weeks or so) bulk orders of organic/natural foods that anyone in the valley (or farther afield, provided you can pick up your order within a week or so of its arrival) is welcome to participate in. You must order by the case (consider sharing with a friend) unless the supplier allows for smaller quantities (some things can be ordered by the half-case or by the each, we have catalogues to help with this), and we charge you wholesale plus 10% and freight (usually 15-20 cents/lb.). In the spring we also place a large order for organic fruit and vegetables from the Okanagan. Similar to the organic orders, most produce must be ordered by the case (these range from 20-40 lbs. depending on the item) although a few vegetables can be ordered by the pound. Orders are due in March sometime (this reserves our order with the grower, although late orders can generally be filled) and the produce arrives from July through September, as it is ready. Terms are the same as for the bulk organic orders - if you preorder, we charge you our cost plus 10% and freight (usually around 25 cents/lb.).

See below for a brief history of the store

More (present-day) photos of the store can be found here.

History of the Dunster General Store and Post Office 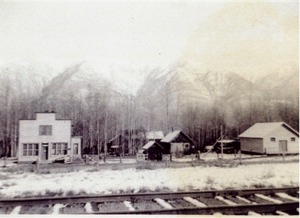 Dunster Store and Post Office circa 1950. The building on the far right was a feed warehouse built in 1945 by Robert Haan, and was converted to the present-day store in the 1950s after the original building (at left of the photo) burned in 1954. Photo courtesy of Mrs. L. Haan as printed in History of Dunster (click on the picture for larger image).

The Dunster Post Office began in December 1915 in the house of the first postmaster, George Hall. He lived on the farm now owned by the McNaughtons, according to History of Dunster, which notes, Amusing stories are still alive of those days, when it was possible to send an order for groceries, possibly for a post camp that fed two dozen men and after many a day of waiting and frustration find the original order letter in the incoming mail. Such things, however, could hardly be surprising in a house teeming with children, pigs and what not.

Per the BC gazetteer, in 1921, Mrs. A. McDonald (Postmaster list gives name as Mrs. Alexander McDonnell) took over the post office, moving it into the log building constructed by her husband, Alec McDonald, opposite the railway station. The History of Dunster says, When Mr. Alec McDonald sold his farm and built the house and store opposite the railroad station he took the post office over and moved it into the store.

Accounts differ, with some saying a store has been located on this site since 1918, but the above indicating that it was perhaps as late as 1921.

The History of Dunster recounts earlier days: Three times a week the mail train came through on [sic] the evening. This gave occasion for gatherings of all the local crowd at the store and post office. Sometimes the train was late, perhaps hours late, which meant plenty of time for visiting among neighbours, for exchanging news and for gossiping generally. When the train came through it was an exciting moment, a link made with the outside world, a fleeting glimpse of modernity. Then came the mail, sorted and given out the same day. By and by the crowd dispersed, some drove home with horse and buggy, others walked or rode horseback, teams of oxen could even be seen occasionally.

We don't know at the moment (help us out if you know) when the store building at the left of the above photo was built. Yellowhead Pass and Its People (see images 536 and 537) is clear about when it burned, however. Eric Norum was working at the store in 1954. "Eric and his two daughters slept in a bedroom over the store, and one night they heard a crackling sound downstairs. The store had caught fire and it burned down very quickly. Eric and his family escaped safely and he was even able to save the piano, which he pushed out onto a snowbank." John Haan, one of the owner's sons, told us that the store caught fire because the floor had been oiled/varnished that day, and the heat from the wood stove set it on fire. It may have been too much for Robert Haan, the owner at the time, to take, as he resigned as Postmaster on 17 March 1955, and Eric Norum was the acting Postmaster for a couple of weeks until Eva Sargent took it over.

The feed warehouse at the right of the above picture was subsequently converted to the main store, and additions were built for storage and housing. In 1972, Claude and Lilly Hill bought the store, and named it Hill's General Store. Claude brought in two old CN bunkhouses to serve as feed storage sheds, and built the store up considerably.

In 2002, after 30 years of running the store, the Hills were ready to retire, and the present owners (Cathy, Chantal, and Lelani) bought it. Today the Dunster General Store continues to grow and thrive, and the current owners are proud to be continuing the store's ~90-year tradition of serving the community. While the mail no longer comes on the train, the store continues to serve as a place for neighbours to meet, visit, and exchange news while shopping or picking up their mail.

Past owners of the store include (locals and past residents, we need your help to fill this out!):